The Biennial Electoral meeting of the United Hungarian Societies 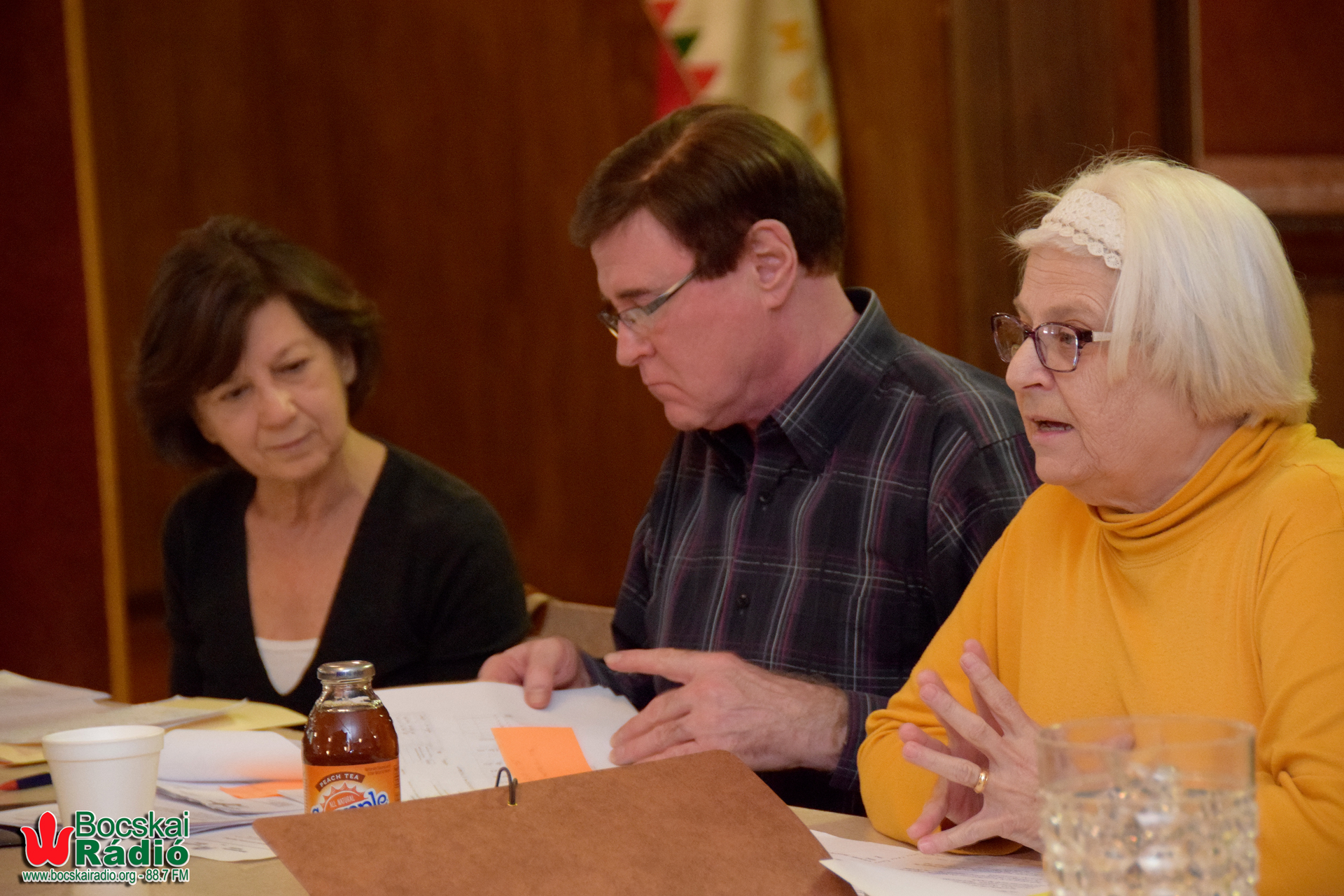 Dear All – The Biennial Electoral meeting of the United Hungarian Societies took place in a “spring-like” climate – both indoors and outdoors.  The 14 organization members, including our newest Bethany Baptist Church represented by Veres Sandor and interim pastor Rev. Kulcsar Sandor, listened to the reports from the officers and elected a new board for the next two years.

The president’s report listed the following 2014 events that our group was responsible for:

Marcius 15 commemoration which was held at the First Hungarian reformed Church where the guest speaker was Hargitai Istvan;

Reception at the Chagrin Documentary Film Festival after the world premiere of “The Forgotten Soldier” by Ravasz Balazs;

Okt. 23 commemoration was co-hosted by the Cleveland Hungarian Heritage Society and the guest speaker was Dr. Csak Janos, Hungarian ambassador to Great Britain from 2010-2014; and

A second reception for the Liszt Academy of Budapest’s visit to the Cleveland Institute of Music.

Two of our local Hungarians were honored in 2014.  Ernie Mihaly for his work with the Hungarian Cultural Garden was inducted into the Cleveland International Hall of Fame and Kati Gulden was recognized by the American Nationalities Movement for her work with a number of our Hungarian organizations.  Congrats to both of you !

We remembered our past presidents, Kemes Laciba and Korossy Jack during their illnesses as well as the loss of one of our delegates from the Hungarian Genealogical Society – Mary Lou Uray.

In 2015, we started out the year by remembering the loss of the organization’s long time treasurer, Korossy Ildiko.

We hosted the Marcius 15 commemoration with the West Side Hungarian Reformed Church where the guest speaker was Fr. Forrai Tamas, Provincial of the Hungarian Jesuit Province;

The Rubik birthday celebration at the Great Lakes Science Center was next on our list where we held a reception.  Two of our member organizations, the Development Panel and the Hungarian Scout Folk Ensemble, joined us in the week-end festivities;

The Chagrin Documentary Film Festival asked us back again to help promote the film called “Heritage” by Pigniczky Reka with some yummy Hungarian treats;

The Okt. 23 commemoration was co-hosted with the West Side Hungarian Lutheran Church and the guest speaker here was Dr. Szakacs Imre, the National Togetherness Counselor and Chief Consulate;

Ernie Mihaly was honored again by the Cleveland Cultural Garden as a tireless volunteer and caretaker at their annual One World Day.

Andrea and Bandi Lazar hosted the Hungarian table on the behalf of us at the International Community Day at the Cleveland Museum of Art in both 2014 and 2015.

We kept each other informed as to what’s happening in the Cleveland Hungarian community through several hundreds e-mails during 2014-15.

We supported our two Hungarian radio programs, the Bocskai Radio and the Kapossy Radio, not only in passing the word along to our members to listen but also during their respective radio-thons.

Our Marcius 15 commemoration, will be held on Sun., March 13 at the  First Hungarian Reformed Church at 2 PM and the guest speaker will be the Mikes Kelemen Hungarian Book Program intern – Bodok Gergo;

Plans are under way for the up-coming 60th anniversary of the 1956 revolution which will be held on Sunday, Oct. 23 at St. Emeric.

Please mark your calendars accordingly and join us.

Mike Horvath, Ildiko Peller and Endre Szentkiralyi thank you for your service in the nominating committee.

Mary Jane Molnar thank you for a wonderful job conducting our election!

Thank you / koszonom to all of you who voted for my re-election.  I hope that I will not disappoint you.

The new board of the UHS/EME stands as follows:

You now have my permission to cancel the Feb 20th “snow day” meeting date and do something fun.