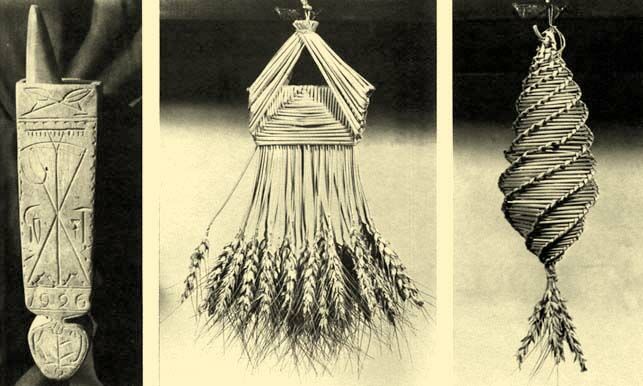 Growing phases of the wheat 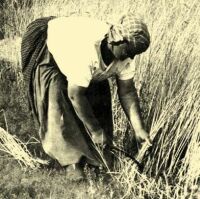 The grain begins to grow into the stalk on Saint George’s day (April24); the ears appear in May; it stops growing on the day of Guy (June 15); and the root breaks on the day of Peter and Paul (June 29).  From here on it just ripens and the harvest can begin.

Harvest day was carefully chosen.  Harvesting was not begun during new moon, and the day of Elias, was also thought to be unlucky, because lighting might strike.  If the first day of harvest was to fall on a Friday, enough had to be cut down on Thursday for a sheaf, so that the main work of harvesting should not begin on a day thought to be unlucky.

Tools used for the harvest

One of the tools of the harvest is the sickle (sarló) .  There are two basic types:        the tooth sickle and the smooth bladed kaszasarló.  There are two types of the kaszasarló, distinguished by the curvature and the way of attachment to the handle.  One is the curved form, the blade starts from the handle, continues straight and bends only toward the end.  The other widens out just above the handle, becomes arched and only then continues upward.  This generally is stronger and in many cases also thicker than the other one.  These tools were used only for cutting down grain.  The smooth-sided sickle was earlier used for cutting grass, and later was used for harvesting. 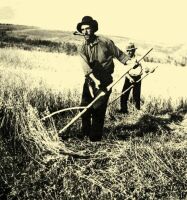 The other grain-cutting tool is the scythe.  But while the toothed sickle is a tool used exclusively for cutting cereal crops, the scythe originally was used mowing grass.  The Hungarian scythe is a slightly curving steel blade with a rigid back along its outer edge.  The use of the scythe for harvesting cereal crops dates back to the 16th and 17th century.  In the 18th and 19, it was recommended as a better and more progressive working tool.  Only men worked with the scythe, while women gathered the sheaves.

Originally, scythes were used to cut sheaves in a row, the rows were then pulled together and small stacks, called vontató, were made out of them.  Two or three forkfuls of crops were made to stand with ears upright in the center and the rest stacked around them with the ears outwards.  The stacks were shaped to a point, tied by a rope, and hauled to the threshing barn.  This was the method used for handling spring cereal grains.

When cutting the autumn cereals, a woman or girl followed the cutter with her back to him and gathered the cut grain with a wooden hook or sickle, and laid them on strawbands.  The tied sheaves were stacked in the shape of a cross.  They placed the sheaves into the four sides of the cross in such a way that the ears lay inside on top of each other, while the cut ends pointed outwards.  They laid a sheaf on top of it, called pap (priest).  The number of sheaves in the cross varies by regions.  However, in the Middle Ages they counted with a system of sixty, and so the félkalangya  (half shock of corn) consisted of 15, the kalangya (shock of corn) of 30, and kepe (double schock) of 60 sheaves.

A day of celebration marking the end of the harvest

The conclusion of the harvest was a day of celebration marked by customs and superstitions.  The family that harvested for itself did not put on much of a celebration  at the end of the work.  Among the poorer folk this came about only if they had done the work with mutual help.  The duty of being host was the responsibility of the gazda, master of the house.

The richer farmers would share harvester.  When he first went out to oversee the work, the women and girls tied his legs with rope, and only let him go free if he gave them money, or  promised wine and food.  There was a belief that, if this was not done, the wheat would yield poorly.  A few stalks were left after they finished harvesting, so that storm and showers would not cause damage to the crop in the following year.

Also, girls made a bell-like arrangement of wild flowers and corn with its ears.  In some places corn-dollies were woven in the shape of a spiral or a tablet.  Hanging the garland on a stick, the boys or girls carried it to the yard of the farmer, singing as they went, or accompanied by gypsy music.  There the farmer’s wife sprinkled a few drops of water on the garland, to prevent blight on the next year’s crop, while the leader of the harvesters greeted the farmer with a poem.  They hung the garland on the main beam over the table, and underneath it served lunch or dinner, accompanied by wine.  The harvest ball followed, lasting until midnight, or even dawn.  In many places the harvest garland was preserved until Christmas and then given to the birds, while in other places, they hung up the most beautiful ones in the church or a chapel, or on a roadside cross.